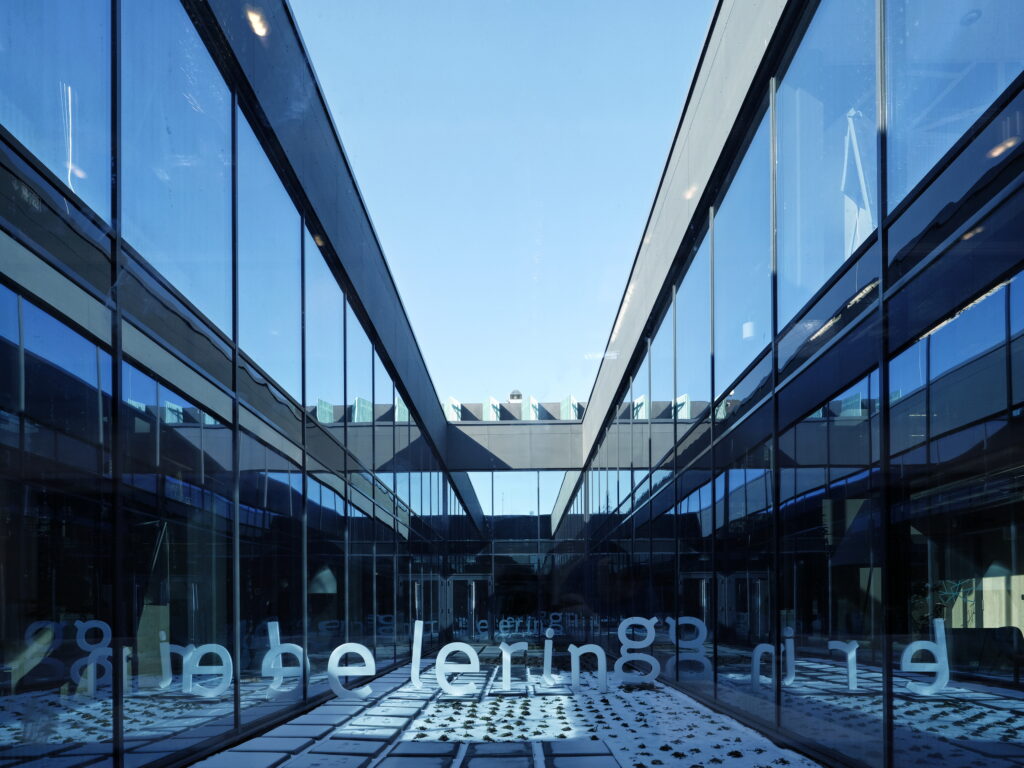 Elering’s new office building is technically a reconstruction, an extension. Although everything is new, the small remaining part of the former structural frame came to define the building’s location as well as its overall height and width. It is actually the old building extended by three times, a simple rectangle with two particular islands in the middle of the office spaces located along the perimeter. The former atrium has become a secluded inner courtyard balanced by the second enclosed and highly secured control centre in the middle part of the extension.

From the street, the building is carefully hidden behind another house and shielded by a vigilantly protective fence. It has little connection with the urban fabric, rather, it links to another infrastructure – the powerline network covering the entire country. It is the brain of the electricity and gas transmission network monitoring and administrating their vitally important circulation.

It is like a strange electrical substation resembling the detached specimens seen on random street corners. Albeit being a manned structure, it is a part of this separate unapproachable and inward-looking world that seeks no spatial contact with its surroundings and needs no further justifications for its existence.

The architecture is hidden and becomes a technological footnote, almost revoking itself. Thus, the building’s aesthetics is marked by totality, with the exterior profoundly technical and stern, dominated by rugged triangular verticals that also function as passive sun protection. And behind them, there is a black and monotonous concrete rectangle with a continuous boring pattern of identical windows – the super transformer of Mustamäe.

In stark contrast, the human scale is revealed in the interior where a recreational area extending over two floors frames the shady inner courtyard. The wide steps connecting the floors create an air of openness and provide space for undefined activities. There is wood, concrete surfaces with timber formwork, pendant lamps made of recycled insulators as well as pipes and cables providing uncovered padding for the ceiling.

The rigid totality of the exterior conceals semitones – the transparency of the ribbing varies by angle with the static state displaying unexpected vitality. The temporal dimension is enhanced by the climbing plants that will hopefully take over the building and gradually dip the flashy blue in green. And there is an autonomous walking path in the north-west corner of the plot on the other side of the car park. Somehow the detachment and totality of the infrastructure occasionally intersect the human and natural elements, albeit with reservations, not seeking for dialogue or humbleness.

KARLI LUIK is an architect, he has graduated from Estonian Academy of Arts, currently works at architecture office Molumba.