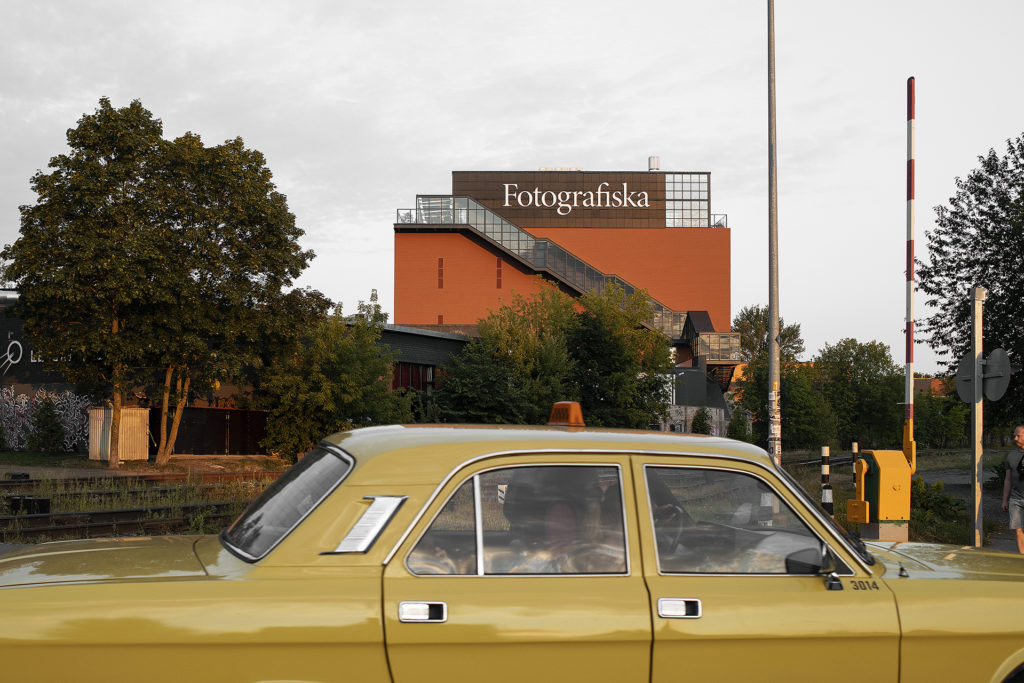 A few summers back, we sneaked into a dark dilapidated stairway feeling our way up to the roof overlooking numerous railway lines in the glow of the white night that wound behind the bushes in the distance with a lonesome freight train rumbling along the rails. Below us was the thundering bass and buzzing people, while up on the roof, there was an old rickety chair stuck in the bitumen and broken glass, with pieces of red brick falling from the edge of the roof. Post-industrial romance of ruins full on. We all knew already that the roaring success of the club Red Building (Punane Maja) in Tallinn nightlife would be short-lived, the temporary lease of the premises would end, there would be some kind of a development with exclusive offices and apartments, all gone, damn the gentrification of Tallinn, let’s go down and have another round of drinks.

Fast forward to June 2019 and the satellite gallery of the photographic art centre Fotografiska has materialised in the so-called red building of Telliskivi Creative City with spacious exhibition premises, events, cafeteria, restaurant, shop and bar. The building was adapted to the respective needs by architecture office Salto with a few offices for forward-looking start-ups thrown in. My social media feed was suddenly filled with pictures taken at the exclusive opening events by influencers and fashionistas, there was gossip that it is impossible to book a table in the new top restaurant, massive public interest etc. The emergence of the Fotografiska satellite gallery in the local scene is certainly a notable occasion creating a lot of excitement. My initial “Wow” was replaced with “Hmm” after the first visit, transforming into “Why not, good luck” after some digestion. But all in good time.

Fotografiska seemed to have appeared from nowhere, with the initiative and private funding coming from outside the contemporary art scene by Rain Tamm, Maarja Loorents, Margit Aasmäe and Peeter Pihel. There was naturally a touch of “secrecy as strategy” in it, but in terms of the small local field operating mainly on the basis of precarious work, it was definitely a “wow”. And appearing in such a ready-made fashion, once and for all! The brand-new thing of beauty straight from the box has with marks of use and even if there was any blood, sweat and tears in making the Stockholm-born UFO land in here, it does not show. There are state-of-the-art conditions created especially for admiring photography, the use of the franchise allows to bring here heaps of world-famous names working in the medium of photography from the past and the present, with the administration work considerably easier than starting a gallery on one’s own. Traffic is usually two-way and the exhibitions launched here can easily travel to the other satellites – Stockholm, New York and London, here we come! Fotografiska Tallinn is open every day until exceptionally late hours that none of the other local art institution can afford (not that they had never had that idea). It is also worth noting the role of the place as an employer, for instance, for numerous art students.

Wandering in the exhibition halls, I am haunted by the question what the act of putting a photo up on a gallery wall can provide in the contemporary age of high-quality picture magazines à la National Geographic and the increasingly professional content on Instagram? One must play the size card and as art alone is not enough, you must add a café, restaurant, shop, bar and the general buzz. At Fotografiska, the auratic experience of seeing and consuming are brought together. The exhibition halls are cut from the traditional sense of time and space pursuant to the modernist white cube ideology, the dim halls shed light only on the photos often marked by highly luxurious form – large formats, lucid and contrasting. The sounds created by the visitors are muffled by the special carpet, the space is meant for losing yourself at the encounter with a grand work of art that appears almost sacred glowing in the darkness and silence (there is something similar to elevator music at the background, although it is claimed to have been specially created for the exhibition). The reception of two-dimensional works and all the beauty one hall after another is rather tiring but unfortunately there are few benches for taking a break or slowing down for a moment, there is no space to breathe between the exhibitions, for instance, a corridor with windows etc. In order to rest your eyes and head, you need to go and consume – either up in the restaurant or downstairs in the café.

In the building reconstructed by Salto, the space definitely does not compete with the content as it tends to happen in the exhibition venues built during the so-called museum boom in the 1990s, such as Frank Gehry’s Bilbao Guggenheim art museum. The adjustments here are highly refined and tasteful. It might be even said that a little boring, surprisingly neutral for Salto’s work. The red building is still red with the characteristic red brick kind of retained but in an ornately polished way.

The main key of the first exhibitions at Fotografiska was similar to action movies – intensive visuals, dramatic and heroic, the exhibitions that try to achieve more than mere astonishment disappearing and transforming in the overall buzz. It was highly interesting to see Anna-Stina Treumund’s exhibition “Lilli, Reed, Frieda, Sabine, Eha, Malle, Alfred, Rein and Mari” again in Fotografiska’s opening programme – in the general background of beautiful and magical pictures, the critical study became a simplified retro-poetics with the elegantly grainy black-and-white photos and uncanny situations-characters neatly in a row. Poetics and beauty are naturally embedded in the given series but it depends on the general context which facet of the multi-layered project will be amplified. At times it seems that the photo projects selected for exposition have no room to dig deeper under the impressive surface layer. Alison Jackson’s exhibition “Truth is Dead” featuring so-to-speak famous people in embarrassing and banal situations tends to reproduce voyeurism and gossip culture rather than explore it critically. The comme il faut surrealism of Anja Niemi in the opening exhibition and Kirsty Mitchell’s “Wonderland” hand the core of their projects immediately on a plate and thereafter the audience sees only the remaining variations. The realisation is obviously highly professional and meticulously time-consuming, but the form-is-content approach makes you quickly forget the impression – similarly to seeing an action film, after half an hour there are rarely more recollections than some random shootouts.

Based on the interviews published so far, it seems that the exhibition programme is put together by three of the four founding members who make the selection together with the head office. It would be a good idea to include a professional with a background in contemporary art, a so-to-speak head curator who would have a somewhat broader vision of how to engage the various expositions in an interplay with one another. And who would dare and be able to take a critical look at the work of visiting curators – for instance, the retrospective of Pentti Sammallahti would have benefitted from a gutsier filter, as it seemed that nobody had dared to interfere with the grand old man’s archive diving and at one point the entire exhibition melted into an even massif of images. It appears that the selection of the first projects to be exhibited at Fotografiska Tallinn was conducted as if in a sweet shop – mere eye-candies in a row can be rather exhausting. The possibility to enjoy half an hour at a time and then come back as suggested by Rain Tamm in his interviewi – sorry, but the ticket is not that cheap.

Then again – financial capabilities are indeed different, the economic growth may have slowed down but the given neighbourhood and people visiting Telliskivi Creative City are definitely not the poorest ones. And the tourists! If there have been numerous discussions in the contemporary art scene on the possible exhibitions that would attract exhibition tourism to Tallinn (and elsewhere in Estonia), then the Fotografiska satellite in Tallinn is definitely one of such attractions. Even the Finns don’t have one!

What could be the role of Fotografiska Tallinn in the local scene of exhibition venues? It appears to me that it has a lot of responsibility to bear – to promote art exhibitions as a form of recreation to the wider audience and to communicate that there is no need to fear professionally realised exhibitions as something “too deep”.

A person walking into Fotografiska can rest assured that they will “get it”. It is like the first step in the consumption of contemporary art, one can relax for a while and look around at their own pace – or even start at the café. The motto of the master chef Peeter Pihel “From leaf to root, from nose to tail” sounds brilliant! And perhaps it will be the stepping stone, for example, to Kai Art Centre (also provided with food and drink facilities!), Tallinn Art Hall, Kumu and then on to exhibition venues requiring somewhat more refined and critical perception of art, such as Contemporary Art Museum of Estonia, galleries, project spaces and pop-up expositions. It is also worth visiting Juhan Kuus Documentary Photo Centre across the square, the contemporary art biennale Tallinn Photomonth taking place this autumn, photographic art fair Foto Tallinn etc. And perhaps the given developments will also motivate those people in the art world who think it is a commercial amusement park for the rich to establish new alternative spaces and come up with joint resistance practises? It seems that there are several ways that the local art scene could benefit from the arrival of Fotografiska.

MAARIN MÜRK (1983) works in the field of arts and focuses on bringing together contemporary art, art criticism, experimental education and other similar themes. Her latest major project was Artist in Collection, which was carried out together with Mary-Ann Talvistu as part of the Estonian Centenary program. The project was awarded with the annual Estonian Cultural Endowment Award and it was acknowledged as part of the annual Estonian Museum Awards. She works as the Head of Centre for General Theory Subjects at the Estonian Academy of Arts and runs a monthly radio program at the Estonian National Classical Radio called Art Ministry (together with Indrek Grigor).

* The restaurant menu of Fotografiska Tallinn.