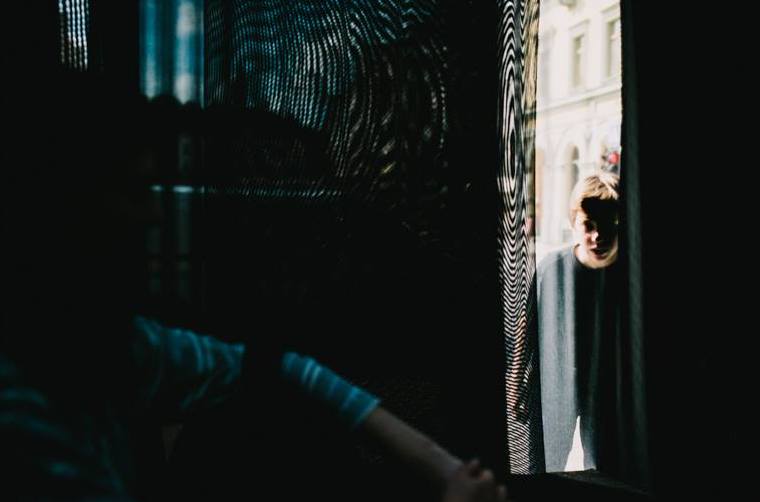 The urban festival UIT was looking for installations that would correspond to the main theme of the festival “An Encounter with a Stranger”. We were interested in strangeness as a feeling or phenomenon and we mainly focussed on the creation of an atmosphere rather than a meeting place. Just like recognition, also strangeness occurs at the moment of noticing. Recognition usually marks the end of increased attention. The longer something remains strange, the longer it keeps us alert. The installation “Minusoid on Sinusoid” attempted to provide an extended threshold between the known and the unknown – highlighting and maintaining strangeness in a familiar place.

The installation manifested itself to the city as a black box with vibrating walls – a black mesh fabric stretched on a wooden frame created the moiré effect and vibrated in the rhythm of the bass sound by recording, manipulating and playing back the surrounding soundscape.

There were ramps on two sides leading to the centre through narrow tunnel-like spaces where an encounter with another person often occurred through a random touch. It came to combine qualities that are exotic to an urban environment – tactility, softness, elasticity and vulnerability.

The open microphones connected with the black box were located nearby in public and also more sheltered places, for instance, by the steps leading down to the bridge and on the promenade along the river. The opportunity to rebel against the social code was not left unused. The situation where a loud bigoted political tirade or a teenage boy’s zesty self-expression distorted by sound effects can be heard from a black box in the city centre is odd and attracts attention. At the time it seemed indeed that the sense of strangeness also included an intense sense of presence.

Later we brought heaps of literature from the city library to tame our young friends. The self-same local boys would spend hours reciting poems and short stories into the microphone. Thus, it was a sequence of quite random various events – one night, for instance, there were turntables in front of the pavilion with the local DJs occupying the space. The black box literally became a giant speaker living up to its physical appearance.

We were inspired by the interest to test the boundary surfaces between design, sound, literature and architecture. The entire audio journey was recorded on a cassette that was later played at Genialistide club as a part of a completely different installation…

PUBLISHED in Maja’s summer/autumn edition (No 94).