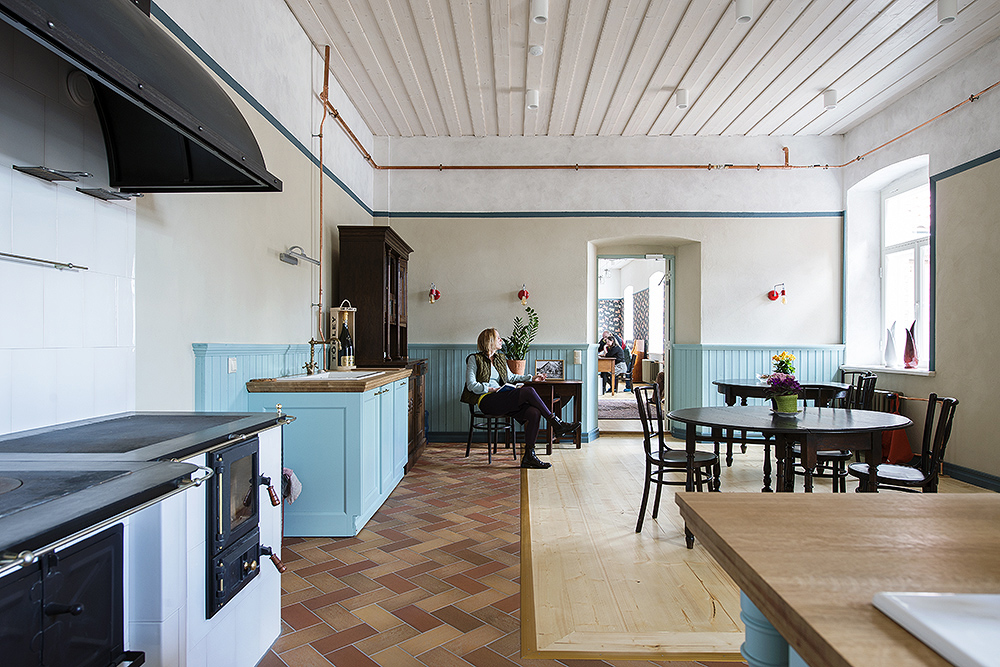 In addition to bringing together various public functions, the former Kulla confirmation house reconstructed as a library and rural municipality office also functions as a gate to the local community.

When reflecting on the confirmation house, I was first reminded of an experience from my country life ten years ago: imagine a pitch-dark November night in the Central Estonian periphery. There were no lights, it had been sleeting and the drive on the unpaved road was lumpy. In an attempt to spare my car while jigging slowly along the bleak roads amid fields and barn ruins, I came to … the local municipality office building. The building is a poorly lit postmodern white brick architectural gem. The entrance hall is bleak and chiming. The dim path on the warped stairs leads to the second floor. I open the door! … and walk into a brightly lit library filling my heart with inconceivable joy of the warmth, light, people and books. I suppose at the time my need to communicate with people and my hunger for culture outweighed the thought of spending a cosy night at my timber mansion. The library certainly satisfied also the given need despite its meagre looks and content.

Living in the country hasn’t always been the romantic private existence in the midst of nature. The daily life often stands for endless drives between the nearest town and fight against the “onslaught of nature”. The typical problems include poor road conditions, power cuts, problems with water, sewage and phone connection, not to mention the fallen trees, invasive thicket and bugs. In a word, quite physical issues! Added to that also some socio-economic concerns that rural residents must handle on daily basis (disappearance of schools, medical centres, postal services etc), it is no wonder that most people don’t even think about the possibility of libraries in the country.

In 1902, Halliste church commissioned the building of a new confirmation house in Kulla village about half a kilometre from the church with private quarters for the sacristan. In 1930-1998, it housed the local school and then remained empty for 14 years. In 2014, prior to the merger of rural municipalities, the local government of Halliste was searching for new premises and their eye was caught by the former confirmation building. The part to follow is reminiscent of the Cinderella tale. The story is not short of a fairy godmother either – the local enthusiast Ene Maaten who did not merely wield a magic wand but actually needed to make superhuman efforts, spending probably hundreds of hours on communicating with the architects (Kalle Kadalipp, Liis Tarbe), builders (Silindia Ehitus OÜ) and other officials as well as on searching for furniture in antique shops.

KADRI ROOSI is a graduate of the department of architecture and urban design of EAA working now as a freelance illustrator.