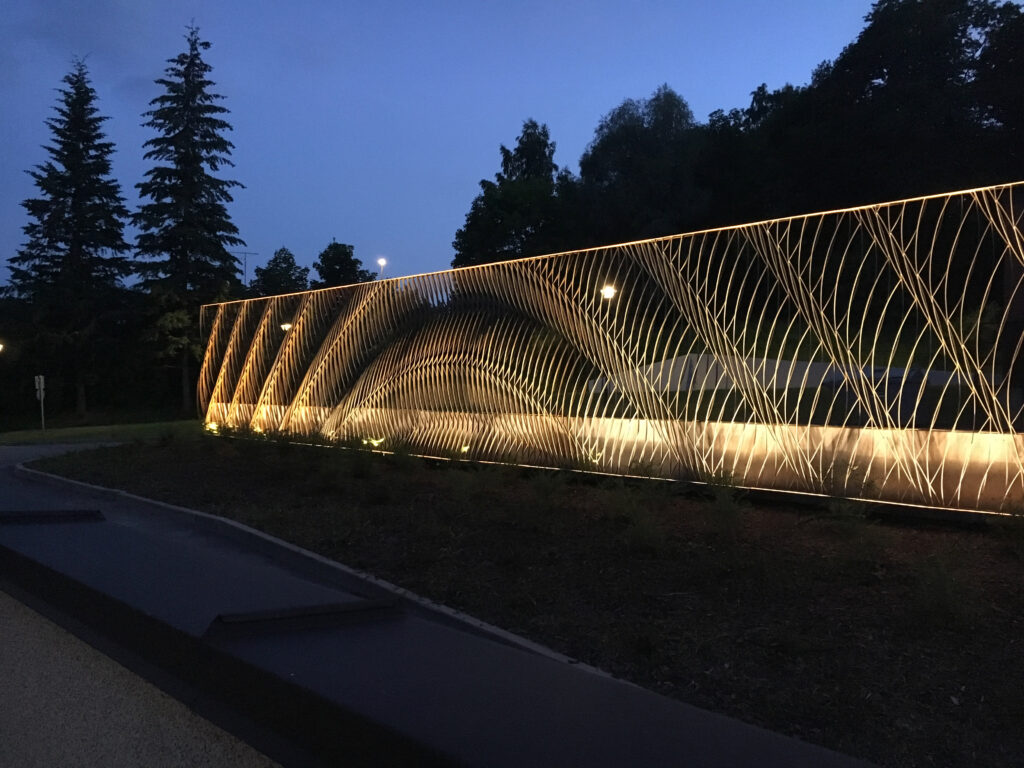 Kaiko Kivi: The Algorithm of Craftsmanship

The use of program-controlled machinery in customised production.

Production makes use of equipment that performs universal operations under the master’s supervision thus allowing to cut costs. In modern workshops, however, there are also numerous program-controlled machines run by codes. The universal example here is 3D printing but in case of natural materials there are more likely also various laser, water jet or plasma cutters, milling and bending machines and die cutters. Unfortunately, the given machines are mostly used for serial production as the code writing for customised products or special solutions is still quite expensive.

This is where the code programmed by means of algorithms in the artisanal spirit comes in as a good old craftsman’s tool. The creation of such means requires good knowledge of the material, work processes as well as the logic and constraints of CNC-machines. Many materials may be subject to various treatments in order to produce all sorts of details, however, considering the volume and budget, reasonable work processes and their logic must be considered. 3D milling as the most universal method is highly costly in terms of material and time, moulding is feasible only in case of large quantities, while CNC cutting is more economical when using machines of lower complexity etc.

The starting point for the featured projects has been the idea and a limited budget. As far as the design and materials are concerned, the authors were practically given complete freedom. The ambition was to create and materialise works that would remain unattainable with conventional design and work methods due to the high cost or volume of work. The design and realisation have traditionally included a myriad of so-called craftsman’s algorithms – software segments custom-made for the given task. Then again, there have also been various operations left for later handiwork that cannot be manufactured or would not be feasible to complete with digital production. In all cases, the realization has been a combination of algorithms for modelling and program-controlled production with the final touches added by hand.

Such collaboration has been highly intriguing in terms of the hybridity of the digital and handiwork as well as the digital solutions immersed in the logic of the material. The latter as well as the treatment process need to be digitalised and simulated up to a point – some of the work is run by machines followed by the more flexible and cognitive craftsmanship. If it cannot be done one way, it can always be done in some other way.

Idea: The mushrooms with screens in the permanent exhibition “Estonian Hall of Fame” in Tallinn TV tower inspired by the science fiction story “The Mystery of the Third Planet”.

Realization: With the majority of the budget spent on the production of the moulds, there was no room for errors. Various algorithms were used in the modelling of the details in terms of the mechanics, compatibility and shape. The moulds were CNC-milled while the fibreglass details were serial produced – two details in 23 units and one detail in 217 units.

Idea: The Rug Pattern Player is an interactive installation in the permanent exhibition of the Estonian National Museum which uses an algorithm to interpret rug patterns as music.

Realization: An algorithm was used to simulate the folding of a steel sheet into a tablecloth with the precise thickness and perforated pattern. The steel sheet of 2mm was cut on a CNC rotary table and folded by hand. The light solution relied on digital simulation with program-controlled lighting.

Idea: The commissioned artwork for the renovated Ugala theatre

Realization: The work is based on an algorithm sequencing the details on the basis of a prescribed function. The creation of cut files for one thousand different details was completely automatized for the production in order to avoid errors. The work weighs 10 tonnes using 180 m² of sheet material and the total length of the cut 2000 m. The details from 8mm steel sheet were cut on a CNC plasma cutter with highly precise markings facilitating the installation. The work was bent and installed by hand.

KAIKO KIVI is an architect who makes computers and robots think with him in creating new works. He is a partner at architecture office Mudel Architects as well as a co-founder of architecture software company Creatomus Solutions.