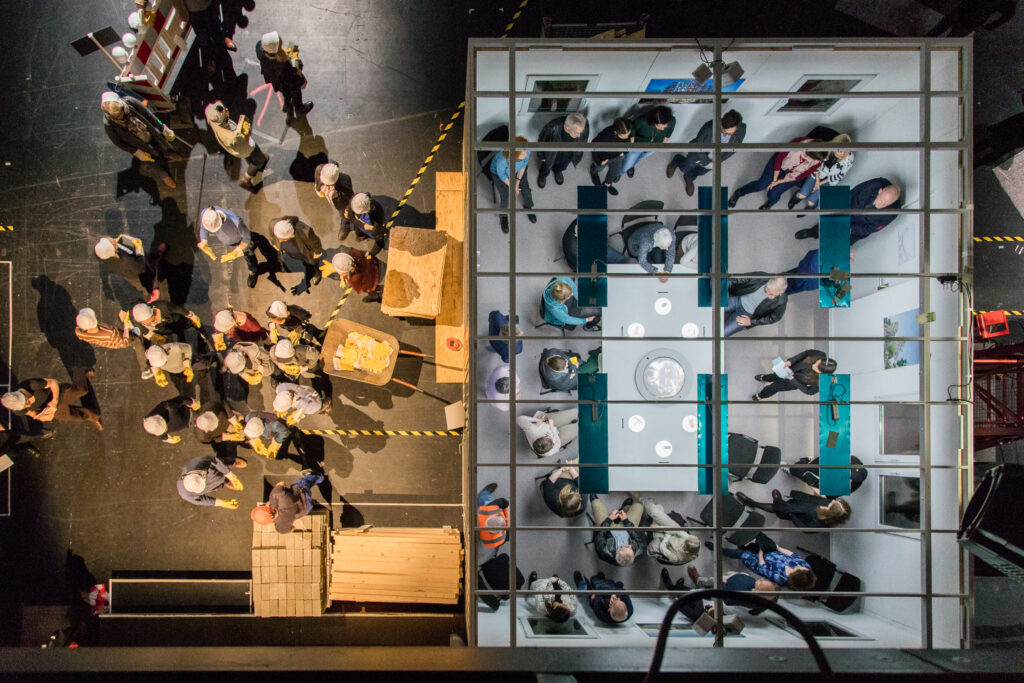 Madli Kaljuste: a glance at the Oslo Architecture Triennale

The seventh Oslo Architecture Triennale, themed ‘ENOUGH – Architecture of Degrowth’, took place in the autumn of 2019. It was curated by Maria Smith, Matthew Dalziel, Phineas Harper and Cecile Sachs Olsen from the transdisciplinary architecture and engineering practice Interrobang. The triennale focused on architecture that stems from reflecting on social relations rather than the pursuit of profit.

Social criticism and self-criticism have been a consistent feature of the Oslo Architecture Triennales (OAT). The 2013 triennale ‘Behind the Green Door – Architecture and the Desire for Sustainability’ pried behind the label of ‘sustainability’ in the architecture of the last 30 years. The 2016 triennale ‘After Belonging’ examined the simultaneous disconnection and intertwinement of both objects and people in the global market. This year’s ‘ENOUGH – Architecture of Degrowth’  problematised the desire for infinite growth, due to which the success of societies is still measured in increasing GDP numbers, even while this is is accompanied by a parallel growth in social inequality, carbon emissions and hopelessness.

The phrase ‘architecture of degrowth’ does not so much refer to architectural projects as ready-made products, but rather to a much-needed shift in mentality. Architecture forms a small, but prominent link in the chain of broader processes. While the fundamentals of architectural education keep instilling faith in the discipline’s capability to strive for beauty and social justice, actual practice often turns out to be something else. The bulk of a spatial practitioner’s daily work does not involve conducting social change. Much more familiar is the role of a cog in a vast value-producing machine. The curators contend that for the last two centuries, the imperative of economic growth has been the primary measure of social success and also the main driving force behind architectural production. The triennale aimed to confront a reality where this whole way of thinking has proven to be a dangerous illusion.

The OAT of 2019 was organised around four typologies, each containing hints of resistance to practicability and profitability — namely, the Academy, Playground, Theatre and Library.

The Academy provided a platform for discussing and developing new approaches to the existent (built) environment. The objects of analysis in the ten-day workshop „Dealing With It“ revealed the context-critical fact that Oslo is one of the fastest-developing cities in the Nordic countries. Among other developments, several cultural institutions (e.g., the National Museum, Munch Museum, Oslo Public Library) are about to move into new buildings. Yet, the fate of already-existing structures, some of which are undoubtedly valuable monuments of their time, remains undecided.

The Playground invited the participants to envisage a city that is oriented towards play rather than productivity. The concept of depense was introduced — a term that refers to spending time or energy on “unimportant” activities that are practiced only for their intrinsic joy and pleasure. Audio tours in gallery ROM asked the visitors to give up their role as passive consumers and partake in an active game that would bring people together.

The Theatre was presented by the curators as a place where the constructedness of our world becomes evident. Stage performance “Society Under Construction (State 2)”, produced in collaboration with German documentary theatre Rimini Protokoll, exposed the stories behind some of the world’s busiest construction sites, thereby raising the question — what kind of society are we building?

Instead of a traditional curated exhibition, the architecture section of the National Museum hosted the Library — a space for accessing and exchanging ideas. Collections based on four subtopics — subject, object, system and collective — drew together samples of professional literature, projects and actions. The use of materials in the exposition exemplified its call to approach design work not by simply thinking about abstract space, but rather by making due with the limited materials at hand. The structures that partitioned the exhibition area were built out of leftover materials from previous exhibitions in the museum. In an ideal world, this fact would not be even worth mentioning. But as one of the curators, Matthew Dalziel pointed out – the logic of construction processes is currently premised on the fact that human labour and re-use are expensive, while raw materials themselves are cheap. That such a premise holds, however, is a historically unprecedented situation and one that is simply not sustainable in the context of a climate crisis. It is clear that our relationship to work and productivity needs to be reassessed.

The Library also featured a thought-provoking fragmentary documentation of the 1969 exhibition “And After Us…”, in which a group of architecturestudents of the time — Dag Norling, Eyvind Kvaale, Gábor Szilvay, Turid Horgen, Heidrun Rising Næss and Snorre Skaugen — drew attention to the forthcoming climate crisis, explosive growth of the world population and ever-increasing inequality. The exhibition, consisting of a tent inspired by Frei Otto’s tensile structures, effective statistical visuals and sound installations, was initially supposed to travel through twelve cities. As it reached its eighth stop in Haugeslund, however, the city was unexpectedly hit by a hurricane that swept the exposition away. Regardless of its ephemerality, the exhibition is considered an important predecessor to subsequent climate debates and an indirect influence on international publications such as “The Limits to Growth”1 (1972).2 The gloomy graphics and pessimistic descriptions of that exhibition from 50 years ago were radical for its time and constituted an effective knock on the audience’s conscience. Today, they remain just as terrifying; yet, one is likely to feel that cautionary rhetoric does not suffice anymore.

In addition to cautionary tales and ungraspable systems, the OAT of 2019 tackled the big issues through tangible objects. Maintenance and upkeep were highlighted as activities that deserve more merit. For example, consider the vacuum cleaner prototype from the design collective EDIT that requires several people working together to operate. In this way, the object transforms domestic work from unpaid labour of a single family member into a collective act. Another witty exhibit by Yujia Bian could be found in the museum’s bathrooms — namely, bars of soap bearing the word “ARCHITECTURE” that deform with usage and eventually disappear. In the external area of the museum, passersby could stop for a rest on a bench heated by a compost heap — an organic waste–disposing prototype built in collaboration of Public Works and AHO students, which by the end of its 18-month cycle has presumably produced 15 cubic metres of humus-rich compost.

The part of the exhibition/library with perhaps the strongest effect and longest-lasting influence is the literature on its shelves, some of which is bound to be unknown to at least some of the visitors. For instance, my own reading list was updated with, inter alia, „Dark Ecology“ by Timothy Morton3, „Mushroom at the End of the World“ by Anna Tsing4 and „Out of the Wreckage“ by George Monbiot5.

The triennale was accompanied by an essay series titled “Overgrowth” (a collaboration with the E-Flux publishing platform)6 and a collection of short stories titled „Gross Ideas: Tales of Tomorrow’s Architecture“. Conjointly, these two could be viewed as a broad-based catalogue of the event. The first is a growing body of critical essays and conversations with authors who participated in the triennale. The second is a sci-fi influenced collection of short stories about possible futures. One of the stories is by Maria Smith, co-curator of the triennale, in which she envisages a world where money has been replaced by carbon quotas for individuals.

The anxiety of the impending climate crisis and central theme of the triennale (degrowth) bring into mind a number of truisms. One is the worn-out saying that it is easier to imagine an end to the world than an end to capitalism. On the whole, the triennale endeavoured to resist such pessimistic attitudes, while maintaining and providing — semi-forcibly, if necessary — a more optimistic, though still self-conscious outlook on the world. An effort well worth following.

MADLI KALJUSTE is a master’s student of architecture in the Estonian Academy of Arts. She has also studied in the Oslo School of Architecture and Design (AHO) and attended several (international) workshops, symposia and get-togethers.

2The recollections and reflections of the 1969 exhibition “Og etter oss…” (“And After Us…”) made their way to the triennale thanks to the research of Beata Labuhn, who is a PhD candidate at AHO. In her work, she studies the connections between architecture and ecology in the 1960s and 1970s in Norway.

4A. Tsing, Mushroom at the End of the World – On the possibility of life in the capitalist ruins, 2015