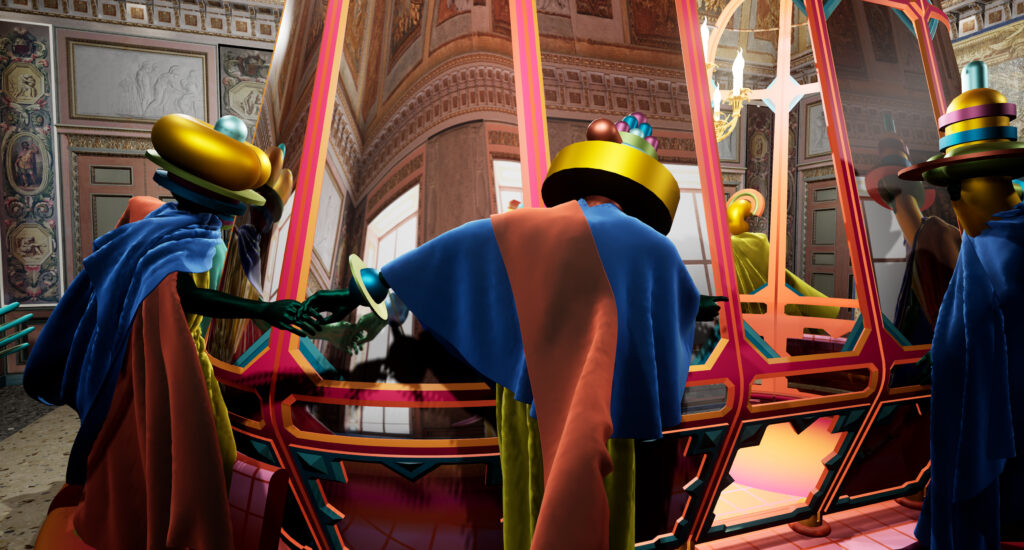 How do you find the content for your virtual speculations1? In TAB, you are looking at the imagery of rental market of Tallinn.

Lara:  We always need a cultural or a contextual reference. For the Brick Vault House in Santa Barbara, Valencia (in boring suburban Spain), there was no point in looking at the typical characterless site. What made sense contextually was construction techniques. We ask “What do you do well here?” And the answer was masonry. The  vaults of the house are load- bearing brick —“Rafael Guastavino vaults”. A construction technique which is only done in this region of Spain.

Fredrik: At our exhibition at ArkDes in 2018 entitled “Value in the Virtual” we explored a potential future virtually augmented city. We used highly referential everyday things, since we claim to be functionalists, and we wanted the exhibition to touch the visitor as deeply as possible and cement a set of ideas for architects about the virtual world. There is no better way for doing that than taking the very tube station that many of these visitors use every day. The reference in this case is highly practical, so this specific way of thinking (or values) could be transmitted on a very fundamental level. In Tallinn, it was the intertwined spaces of many homes of avatars, mixed together into an immersive environment2.

What are you trying to convey? Is this a commentary on digital technologies or the change in the way we communicate?

L: We want our exhibition projects to inspire people. Immersive virtual reality environments are about to come, but they have not surfaced yet. We would like to shout out: “Hey This is the way things might be! Are you on board to design all of this?” We really don’t have a specific roadmap for this yet. We have the internet and you can experience immersive environments online, but not yet in real three-dimensional space. We wanted our work to ask: “Don’t you all want to be part of this?” This we did by literally putting together a series of examples of how this immersive space could look like. Then questions, would be prompted. The project was really about bringing people onboard, to get them thinking about how we might live tomorrow.

Do we need to be critical of this coming time of immersive environments?

F: Some say the transformative impact of the immersive internet is comparable to the importance of electricity. The shift might be so fundamentally strong that it could even create backlashes similar to regulations we saw adopted against psychedelic drugs. If you talk about the way how Marshall McLuhan describes that culture has a difficult time accepting new technologies and it is impossible to start using a technology in the way it should be used. It will always be used with a mindset of the previous culture. Television was used in the way that theatre was approached and so on. Our time is no different! We might be using these new technologies, but our thinking is several generations old. So we definitely think it’s important to force such a relatively conservative discipline as architecture to look at these issues, critically engage with them and put them to test.

L: There has recently been so much talk about how phones and social media are bad for our society, but why don’t we talk about architecture in this context? With the current status of architecture being that of a corridor and a room. Every room has a single entrance and a single door that you close. This is the reason why we turn to mobile phones and do not want to explore space and communicate. We try to be incredibly private and not to disturb each other. It’s not so long ago when we did not have corridors and moved from room to room interconnectedly. It seems so illogical now, but there might be many forms of living we are leaving out of the formula.

We think about exploring the phenomenon of TV and how little architects have considered how this screen changes how we see things. We would argue that late modernism was possible because of television. It’s a style of white walls, because why would you need features or trivial details to rest your eye on? We are not saying that ornamentation or pattern replace TV. They are different things, however, when you move to a new home and it already has some specific features, you will feel immediately at home, yet when you move into a white cubicle, you will need to fill it up with furniture and paintings at first. We think we are designing spaces for people, but actually IKEA is doing more for people in that respect than architects. So we ask, “How can we be really generous and do something for the people?” For sure, it needs to be cheap and affordable, but there are little things on top of that don’t make it more expensive and possibly make it more playful and make people feel more at home. It should be a MUST for architects!

So our consciousness is affected by both virtual and real space. Is there anything else that informs this reality in the future? Can this blended reality be criticised?

F: I think it is inevitable. All cultures had their backlash against virtual culture — from the censorship following the printing press to photography stealing your soul. But information could be seen as its own entity that wants to live and spread as far as possible. People create tools for building connections and bringing things closer together. Communication between minds gets easier. Through printed press, spoken word and modern media.

L: We have evolved as a species to connect more and more information and knowledge to a wider audience. We first build villages, then cities, then countries and then we fly to outer space to realise the Earth is one big blue marble. We constantly strive to find ways to build more connections.. I think technology is offering us another new way of being together that would rely on another form of communication than urban environments do.

F: The next big turn in communication is space and that is why it is important for architects to consider it. The messages that a church or an architect can convey with a building in its lifespan cannot really be compared in architecture to instant messaging. In about a hundred years, space will be established as the next step of communication technology or medium.

What does a house have to say to you?

F:  The human mind is capable of adapting to new flows of information. If you took someone from the Middle Ages to our contemporary time, they would have a stroke in 15 minutes because of the information overflow. Even one generation ago, when I got my hands on a smartphone for the first time, I could not breathe out of excitement and it felt impossible to have a normal life with a smartphone. Yet the human mind is incredibly plastic and adaptive. A more interesting question whether our digital generation is going to witness something like in the Renaissance when they fought against the scientific revolution and forward-thinking scientists like Galieo Galilei were put under house arrest for clashing with the church.

We make a distinction between this mute speaking architecture and potential hypothetical speaking architecture of the future. Architecture in the modern age has nothing to say. It’s just a chamber where communication can happen. In previous times, when we had no technology, architecture had to do part of the job. This is why we see the virtual technology as somethingwhere architecture could really begin to speak at the speed of thought, after more than a century of modernism, a glitch when architecture did not really catch up with technology.

L: To say that architecture is speaking leads to a lot of misunderstandings. It does not speak a language. Religious architecture was full of ideas. Architecture is a great vessel for ideas.
Things can be conveyed through architecture without using language and rather through form.

Why do we use tools like Pinterest, for example? If I tried to explain to you how I designed this space using words, I don’t think I would have the words to describe the task at hand. So you get a lot of photographs, none of them is exactly like you want it to look, but they all together reveal the things that are shared and those instances form an aesthetic concept which also gives us a whole new lifestyle and ideology.together. That is pattern recognition and we as humans are so good at it. I know what a face is and what a chair is, but AI has a hard time doing that. So instance-based concepts are something we don’t really recognise yet as a powerful tool and we should take it seriously as architects. It’s a completely new way of communicating ideas.

F: Even if we do not interact body to body, a belief in our sanity is just a map that shows that our connections to our minds are the same as in other minds.and they are stable. If they are slightly off, it’s insanity. It’s the same reason why psychedelics were banned, because the society could not figure out a way how these completely different social interactions intertwined with normal sane people.

L: Reliance on stability is an old concept. That’s why we invented law, marriage, etc. If something is stable, I can evolve to worry about other things. We have reached a point where stability is almost at its MAXIMUM level. We live in the safest of times, even if we think this is mayhem. The great leap we have to take for the next paradigm shift is to think that we have such a stable base that we can accept instability. We can accept more unique (yet temporal)relationships. If we have a very stable survival base.

F: It will be weird, the question is whether it will be too weird …

JOHAN TALI works an architect at the Estonian architecture office molumba and serves as a co-curator of the EEA Open Lecture Series.

HEADER: The augmented reality installation “The Wardian Case”, in Milan, 2019.

1 If real-time information and pictures of the virtual social networks (the avatars of other users as well as other geometry (e.g. furniture or architectural elements such as walls)) reach the observer’s real world through augmented reality technology, an architecturally expressive augmented reality space emerges. A complex spatial image transpires into the real physical world where the information of other similar users gets exchanged. He sees your world and you see his – all in the staged or framed space such as in flats in Tallinn.

2 Immersive technology simulates a physical environment by evoking sensations that result in a sense of immersion into the given environment. If the real architectural environment resembles the one in simulation, an illusion is created blurring the boundaries between the two worlds and allowing them to be observed as one. The work of Space Popular is in many ways like set design where they create both the real environment and the simulated virtual environment running parallel to it.