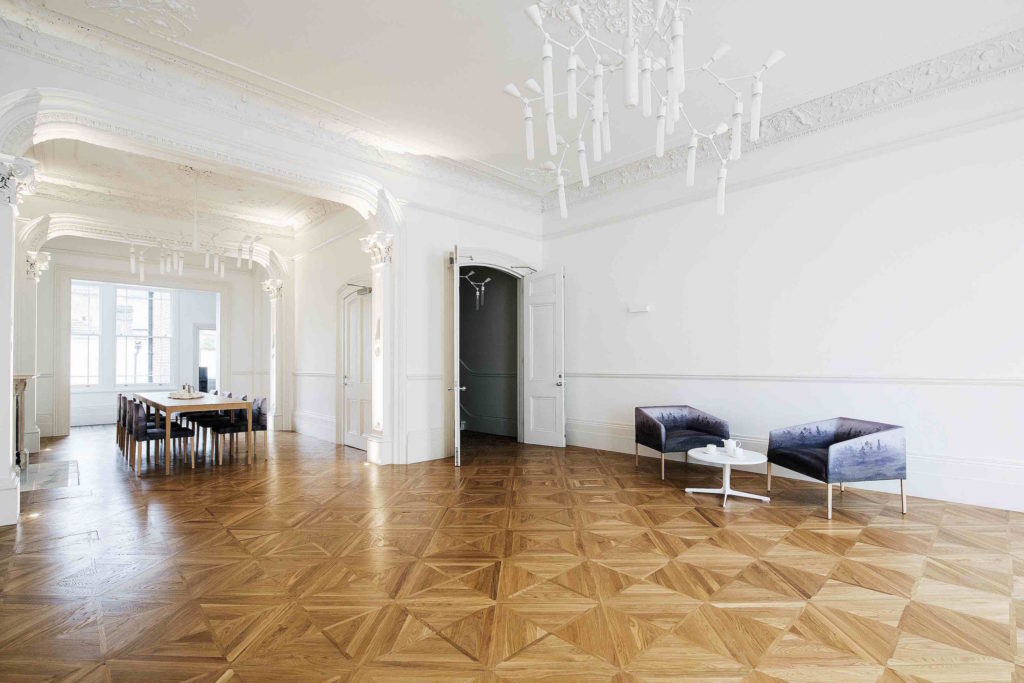 Ann Alari. A Bogscape in a Birdcage

The Estonian Embassy in London is a truly exceptional place for me. Diplomatic activity began at the address 18 Chepstow Villa back in bygone days, when the Estonian Institute was involved in the high-priority task of readying the freshly re-independent Republic of Estonia’s embassies in Western Europe and North America. The original location, which now houses the Estonian House, met almost not a single requirement for a modern embassy; and yet, it offered an opportunity for the immediate launch of diplomatic activities, which was of chief importance at the time. While working at the Estonian Institute during those years, I was required to regularly communicate with the Embassy by telephone, which forever instilled in me a perception of the time difference, as well as an understanding of the rhythm of bilateral cooperation – skills, which individuals who work in or with embassies understand so well.

At the time that the Embassy moved into its Hyde Park Gate location, I was enrolled in the London School of Economics and Political Science, where I immersed myself in the study of international relations. The route from school to the Embassy – down Piccadilly to Kensington along Hyde Park – became a familiar “jogging” path that I undertook quite frequently. My field of study entailed the perpetual specification of details. Furthermore, the Internet Age had not arrived yet, but it was crucial to know what was being published in Estonian newspapers, and the Estonian Embassy generously accommodated students in this matter.

Now, the Estonian Embassy in London has been operating at its new location at 44 Queen’s Gate Terrace for more than a year. The building is one in a long row of Victorian dwellings set side-by side – ones, which on sunny days are blindingly white. For visitors, every building begins with the façade. The Embassy building’s exterior, which was designed in the most distinguished style of its era, dates back to the mid-19th century. William Jackson played an important role in shaping the district, the development of which accelerated at a time when the British were organisers of the 1851 World’s Fair.

In addition to the historical façade, many buildings in London have preserved, more or less intact, the original kitchen, bathroom, and water closet. This is not always a result of strict heritage-protection stipulations being imposed on their renovation. No doubt a feature that speaks to a love for the old-fashioned is the fact that even today, many British buildings have separate warm- and cold-water taps, which produce lukewarm water only when the two streams collect in the sink.

As I write these lines, a lively debate initiated by the RIBA (Royal Institute of British Architects) is underway on social media. The discussion is over whether the interiors of historic buildings, in addition to their façades, should be preserved as much as possible in the future. Currently, it appears that façadism is winning, which means that from now on, the renewal of buildings’ interior structures and furnishings may get a green light more often.

Many different countries’ London embassies are situated in the Kensington area. Quite a few of the buildings’ historical façades have been immaculately preserved – even in their earliest days, the structures housed lively debates among those whose voices counted in society. They reflect the original owners’ social esteem and their identification with decision-makers. The terrace house has a much wider, and even symbolic significance for the British. The principles upon which this type of residence was designed were known to every social stratum – no matter that the buildings themselves were as different as night and day, depending on the owner’s position in the social hierarchy. It is, in a sense, something superior to class, which connected many. And if Philippa Lewis (Everyman’s Castle, 2014) is to be believed, then the majority of Brits have most likely lived in this kind of a house at least once in their lifetime.

The renovation of 44 Queen’s Gate Terrace was completed more than a year ago, after which the embassy’s doors were also opened to visitors, whose numbers have risen impressively. A fair testament to high public interest in the building is the fact that on the city’s annual embassy open-doors day, the Estonian Embassy was so popular that the amount of people wishing to tour it exceeded the limited time frame allowed.

I believe that both those, who are concerned only with façades and those, who handle interior design in a contemporary fashion will be satisfied with the building. Here, the new and the old are held in inspiring balance. I can imagine one pulling up to the Embassy in a black London cab, hurrying up the original front stairs, stopping for a moment in the unexpectedly spacious coatroom, and perhaps noticing the unassuming landscape photographs embedded inconspicuously into the surface of the walls, as well as into the curtains in the adjacent room. This person might enter the powder room, where he or she will be astonished to hear birdsong. No, music and pleasant aromas would not have surprised that seasoned Londoner – but birdsong in the modern WC of a Victorian building? Still, it fits so well with what was once said of the inhabitants of these houses: that they lived like birds in a cage, fluttering up and down, up and down in their relatively narrow but tall dwellings.

The carpeted staircase that leads up to the reception room is mutedly mottled like a mossy hummock. The large, white-painted wooden double doors swing open, and once the visitor steps inside, it is as if he or she has arrived at a mid-19th-century Facebook page. This is a fitting comparison, since the person is standing behind floor-to-ceiling windows that were once meant to flaunt the occupant’s distinguished guests to the neighbours. Turning away from the windows, the visitor may be taken aback by the spaciousness of the room and its gentle atmosphere. The walls and ceilings are white, the other furnishings are pale-coloured, and the wooden parquet intensely reflects illumination. At the same time, the walls and ceiling bear Victorian ornamentation – unexpectedly modest elements under a coat of white paint. Taken in as a whole, the room creates the illusion of borderlessness, which is complemented by fairy-tale chairs. On the back of each chair is a hazy picture of a bogscape, amplifying the fine-tuned vision of nature pervading the entire building; a conception reinforced by the selection of materials and conceptual solutions. This impressive transition from something very specific to the unfathomably universal is an outstanding tightrope trick that was accomplished flawlessly during the Embassy’s renovation.

ANN ALARI is a London-based Estonian journalist, translator, and author. She is a member of the FPA (Foreign Press Association) and the Estonian Writers’ Union.

PHOTOS of embassy by Terje Ugandi.