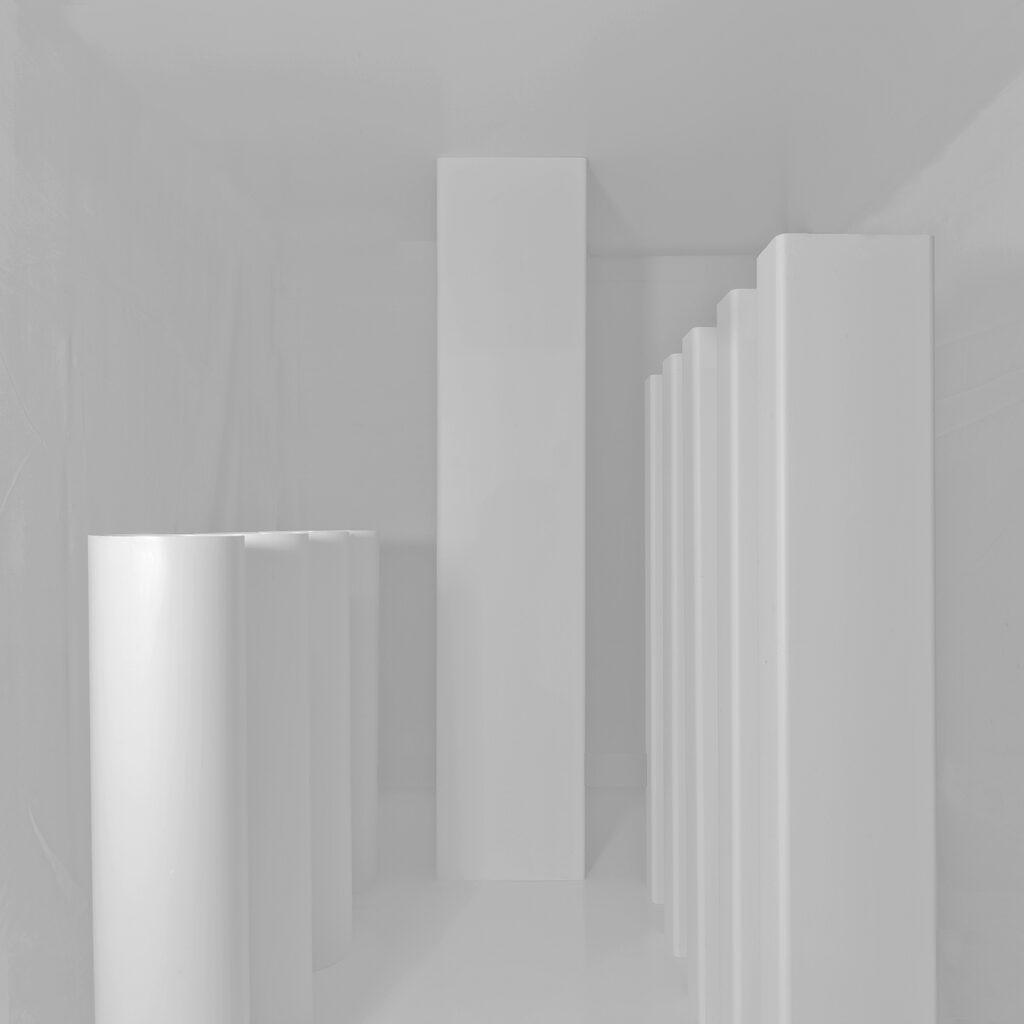 Jaak Kikas. Vint and Maasik, or, the Love of Geometry

Stepping from the bustling city into the metaphysical exhibition hall on the second floor of Rotermann Salt Storage, one might at first suffer a slight loss of balance — similar to when hitting the brakes while driving really fast and the world rushing by suddenly stops. Time falls away and all that is left is space — nothing but timeless, eternal shapes and sizes. Geometry has been one of the foundations of mathematics already for millennia (we all remember Pythagoras, right?). Galileo Galilei, comparing the Universe with a grand book lying in front of us, said: “This book is written in the language of mathematics, and its characters are triangles, circles, and other geometric figures, without which it is humanly impossible to understand a single word of it; without these, one is wandering about in a dark labyrinth.“i (Il Saggiatore, 1623). Geometry can also be seen as a sort of bridge between science and fine arts. Geometric shapes (Galilei’s „triangles and circles“) are more familiar to our sense perception than numbers, which are employed by physics in appropriating the world.

The delicate graphic vistas of Mare Vint have fascinated viewers already for a while now. These timeless constructions of ideal objects hover over our messy, vociferous, conflicted reality as a kind of hope or promise of (and yearning for) something brighter and more enduring. Delving deep into Mare Vint’s litographic worlds — by getting really close to the works, almost as if to step inside — we can see that they are composed of points and curves. Similarly, the objects in our physical world are composed of particles or perhaps (on a more fundamental level) of strings — unimaginably thin vibrating threads. As we retreat from Vint’s litographic worlds by stepping back from the works, their points and lines begin to merge into surfaces with varying brightness. And as we move even further away, our brains suddenly pull off a wonderful trick — we are presented with a glimpse into a three-dimensional metaphysical space. White cities begin to take shape. Yet then again, what is our physical world really like? While visual art in its many manifestations aims to project the “actual” three-dimensional world onto a flat surface, there is also a hypothesis in fundamental physics known as the holographic principle, which speculates that our ordinary percpetible three-dimensional world can be equally described as a process on the two-dimensional boundary (event horizon) of the Universe. Besides Mare Vint’s black-and-white graphic art, she has also works in colour. Yet, in the pastel cities of these works, colour turns out to be just as illusory as the “surfaces of points” in the lithographs. These colours are just as ephemeral as the illusion created by spinning a black-and-white Benham’s disk — only a minor deviation from a blank white surface.

Wikipedia defines metaphysics as „the branch of philosophy that examines the fundamental nature of reality … using — instead of observation, measurment and experimentation — speculation, reason and logic, in order to determine the non-measurable aspects of reality, and its timeless, unchanging and most general regularities”. Based on this definition, it would seem that modern physics is largely turning into metaphysics. Thought experiments have played an imporant role also in the earlier history of physics, but today, fundamental physics has reached such heights where “speculation, reason and logic” are indeed the only way forward — at least until our experimental capabilities catch up with our thought, which is currently running far ahead. The attraction of metaphysics has, of course, also found its expression in fine arts. One of my favourites, Giorgio de Chrirco, has even named an art movement after it — pittura metafisica. This attraction finds its expression in Estonia, too: in Dénes Farkas, Anu Vahtra, Jevgeni Zolotko – to mention only a few. According to Vint herself, a constant aim of her art has been to create ideal landscapes that would also have a certain magical charm: “Magic and metaphysics often belong together, I suppose. For me, metaphysics means a certain kind of peculiarity, unreality.”ii

The combination of Vint and Maasik makes so much sense and is so harmonious that one is tempted to ask — why only now? Then again, it is likely that Arne Maasik has used namely this exhibition to step towards a greater unity than his previous works would have allowed. Having earlier looked for, found and presented the metaphysical aspect of the real world — in buildings and scrubby thickets — he has now moved in the opposite direction. This time, he has designed and built the architectonics of an ideal world by himself, and then captured it in photos.

Photography has the effect of instilling the belief in the “actuality” of the what is photographed; the inconceivability of the scale only accentuates this impression. Looking at ideal geometric objects, we are naturally reminded of Dürer’s “melancholic polyhedron”. Yet, while Dürer only used these objects to underline the enigmatic atmosphere of the picture, for Maasik, they are “things-in-themselves” in their completeness and… indeed, one could even say — their divinity. Nothing extraneous could affect their self-suffiency, nor add something significant to it.

As I leave the exhibition, I find myself in a rather different environment: the frenetic after-work rush hour of urban traffic. But I have taken along an experience of the possibility of ideality — at least as it appears in the visions and hopes of artists. The exhibition features some works from Mare Vint’s “Broken Circles” series. This brings to mind an ancient plea that is perhaps even more topical in the turbulent contemporary world: Noli turbare circulos meos!iii

JAAK KIKAS is a (meta)physicist.

iii “Do not disturb my circles!“ said Archimedes to the Roman soldiers who came to arrest him, referring to his drawings in the sand.