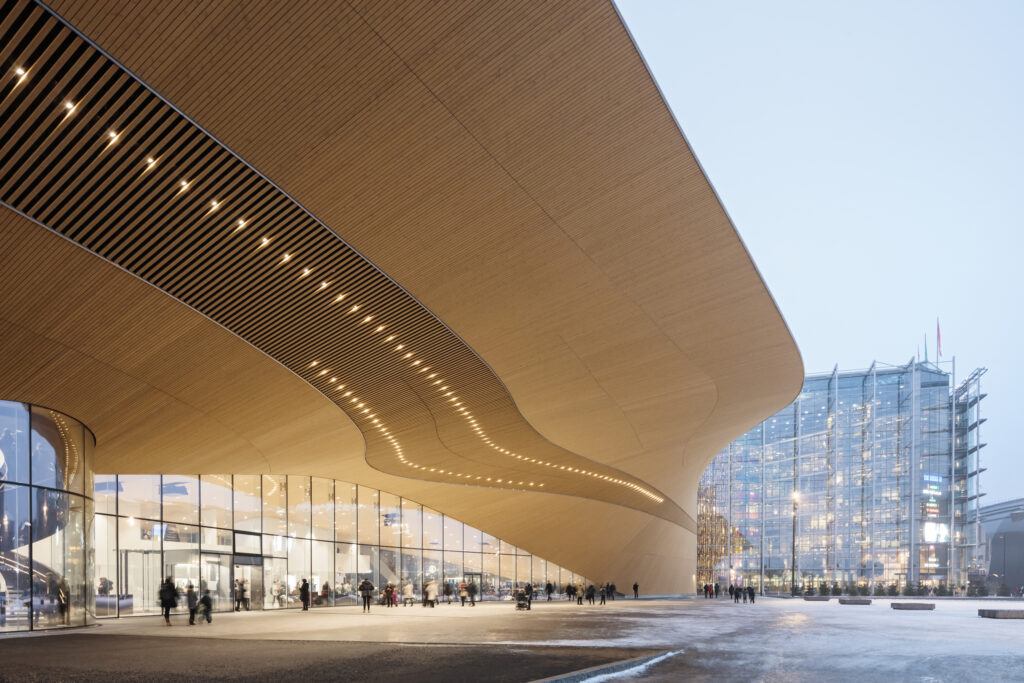 Tarja Nurmi gives an overview of the current state of Finnish architecture and introduces the most outstanding buildings of recent years. Finland, excelled in public buildings, is now facing the challenge of housing.

In the field of architecture, Finland has been considered some kind of a small superpower. There have been world famous architects like Eliel Saarinen, Alvar Aalto and many others, among them also Erik Bryggman. Women like Wivi Lönn and others have also done exceptionally well. It would be difficult to get an overview of current Finnish architecture without stopping briefly on the destiny of architectural heritage.

The legacy of Aalto is now in relatively good hands. In the case of Saarinen, the administrative part of Helsinki railway station has been sold to a hotel company and the station restaurant rented to a hamburger chain. Many state-owned historical buildings that are a part of our national heritage are sold to real-estate investors and optimistically converted into high-end hotels or luxury apartments. When state property is sold to the highest bidders and even speculators, it will be lost for the people forever.

At present, there is a revival of the architects Raili and Reima Pietilä. Both Dipoli building in Otaniemi (from 1966) and the Finnish Embassy in New Delhi have recently been restored and technically updated by ALA Architects. The embassy is a competition winning project (1963) but built and taken into use as late as in 1986. Dipoli with its fantastic concrete ceilings and flowing series of spaces is now the main administrative building of Aalto University (former Helsinki University of Technology). It also serves as a student and staff canteen. After many changes done by some disrespectful or thoughtless owners/users, the restoration-rejuvenation project has been a genuine challenge.

Otaniemi Campus is still known for both its finest Aalto buildings and the lovely and nicely restored small chapel by Kaija and Heikki Sirén. The central building Väre, the competition winner by Verstas Architects built in red brick was taken into use in 2018. In addition to the study areas and workshop spaces, it also includes an elegant underground station, shopping centre and several restaurants. All of the relatively new underground stations between Helsinki and Espoo excel in their architecture.

Nowadays some genuine experimentation is taking place in the field of wood construction. Still, rather many recent examples seem to be a far cry from refined detailing and genuine architectonic quality of earlier years. Quite interesting are some experimental small one-family houses in solid timber by younger architects have made it into architecture publications. There are architecture studios such as OOPEAA, Avanto and others who have recently excelled in building with wood and others follow in their footsteps. Avanto Architects has created the highly popular seaside sauna and restaurant-café Löyly. There is the highly praised Kuokkala Church, originally a winning competition entry by Lassila Hirvilammi Oy and Luonti Arkkitehdit, and the Puukuokka housing project in Jyväskylä by OOPEAA. A rather recent project by the same office is the popular new sauna on the small island Lonna close to Suomenlinna fortress.

Buildings with massive brick walls and natural ventilation also seem to be making a comeback.

In the field of building with concrete, some high-quality experimentation could be mentioned, among others, for instance, a modest distillery building in Ostrobothnia by Avanto architects.

Finland is undergoing a building boom but also a strange demolition rage. Even buildings from the nineties are under threat and may or will be replaced by taller buildings with even more than double volume. Similar rage could be noted in the sixties, when neo-renaissance or Jugendstil buildings were recklessly torn down and replaced by soulless or mediocre buildings with lower floor heights. A polemical book by architects Vilhelm Helander and Mikael Sundman with the title “Kenen Helsinki” (“Whose Helsinki”, 1970) was then a highly important wake-up call. It put a kind of a stop to this harmful trend and helped to create the needed resistance. It might be high time for a second round of such critical writing.

In some cities and towns, real estate businesses and construction companies seem to be the ones calling the shots and running the show. Some politicians in Helsinki are even questioning the competence of trained design and planning professionals. There is also a rather one-sided ideology regarding what makes a city and what kind of urban environment is hoped for: perimeter blocks, higher buildings and, again, density, density, density.

The idea of several different typologies coexisting within a city or a town seems to be getting completely lost in the middle of the urbanization hype. There are relatively loud social media groups that demand “beauty” back into architecture and consider all that is new or “modern” to lack in aesthetic quality. The Finnish version of such a social media group has been imported or copied directly from Sweden.

Not a minor problem is the accelerating urbanization that leaves smaller and previously liveable cities and towns in trouble. The credo boosted also by the media reads as follows: only Helsinki, Tampere, and maybe Turku are important – and that´s it. The truth might be more complicated and the tide might still turn. There is rather a short-sighted trend to accelerate the urbanization development by deliberately concentrating on services of ever bigger units, hospitals, schools and kindergartens included. In the countryside and smaller towns, the property values of houses and apartments are going down in comparison with the soaring prices of housing in Helsinki and even Tampere.

TARJA NURMI is a Helsinki-based architect, architecture critic and author of documentaries. She has recently established the architecture and film festival Ark Rex in collaboration with Amos Rex art museum. She has been awarded the Mark of Distinction by SAFA (2005) and the medal of the Knight of the Order of the Lion of Finland (2010).