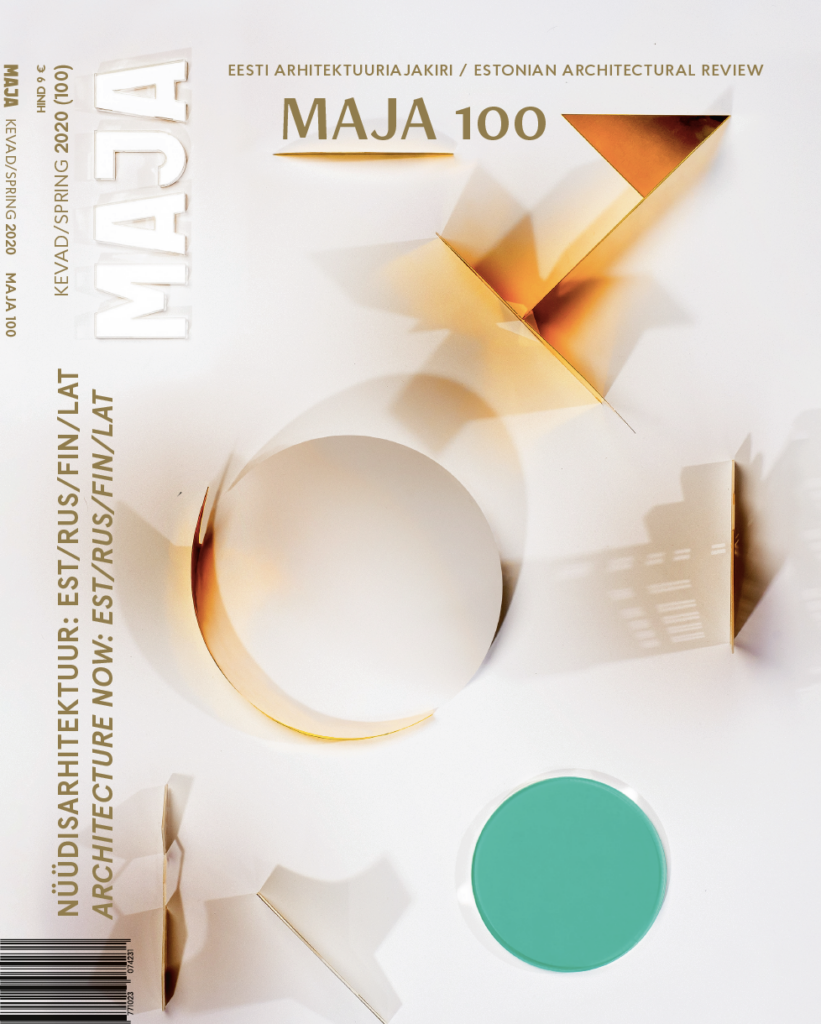 Maja has reached its 100th issue. The journal was launched in the turbulent 1990s, in 1994 to be exact, spurred by the intent of a small group of architects including Ado Eigi, Enn Rajasaar and Kalle Vellevoog to introduce examples of Estonian architecture that had reached a state of completion. Over the course of more than a quarter of a century a lot has changed about the journal: its content, the publisher and financial model. What has persevered, however, is the fluidity of Maja in mediating the unique body of knowledge and skill that is embedded in the discipline of architecture. The versatility of architectural knowledge is wonderfully expressed by the Estonian concept ‘the art of building’, which conveys a certain state of sizzling in the twilight zone between the rational and the creative, the tangible and the experiential—between matter and radiation.

Estonian architecture and spatial culture have both changed as tempestuously as the Estonian society throughout the years of publishing Maja. A spirit of searching is what reflects back from the vintage years of Maja—once it is the oppositional mindset that comes through the critique targeted at the building boom and looks more towards theory; at other times it has been a milder resonance, a dialogue, a constructive attitude. A cultural journal such as Maja, which has most certainly always treated architecture as an art of space, is not only reflective and charting by nature, but also formulating, instigative, exploratory. No cultural journal would be feasible without these inherent ambitions. This, in turn, reveals another kind of parity that seems to be keeping Maja in an excitatory state—to remain in dialogue and mediate, while still learning to speak, probing the ground for a new, different kind of language.

The architectural process involves various media: models, drafts, sketches, diagrams, bricolage, digital means, to name a few. Different media help to outline different facets of a concern. Once completed, a building becomes a mediated object either through photo or verbal description, unveiling unforeseen perspectives and marking the beginning of a moderated life for a work of architecture. The present issue investigates the current state of architectural photography and architectural reporting, and reflects on the changes and role of Maja as an architectural journal.

We invited architecture critics from Latvia, Finland and Russia to join our celebratory cause and write about the latest most impressive architecture and tendencies in the spatial design of their home countries. Obviously, the issue at hand features a review of a similar nature about the current state of play in Estonia. The circle of countries represented in this issue, which might seem slightly unexpected, was not grouped to find a cultural or historical common denominator, but instead, was spurred by an initial intuitive impression of how much our neighbours’ aesthetic language differs from each other and how different the architectural activities in these respective rich backgrounds are.

Although the legacies vary—Finland’s powerful architectural tradition and meticulousness at designing public buildings, the founding of St Petersburg as some sort of mythological act that determines the genius loci, the centrality in Latvian cultural objects and their population decrease—the critics also find unanimity in subjects that discuss the lack of attention reaching housing issues, ways of urban living and conceptualisation of space that allows for greater social equality. May the plenitude of additional topics raised by our neighbours’ reviews delight the reader! Enjoy our anniversary issue!