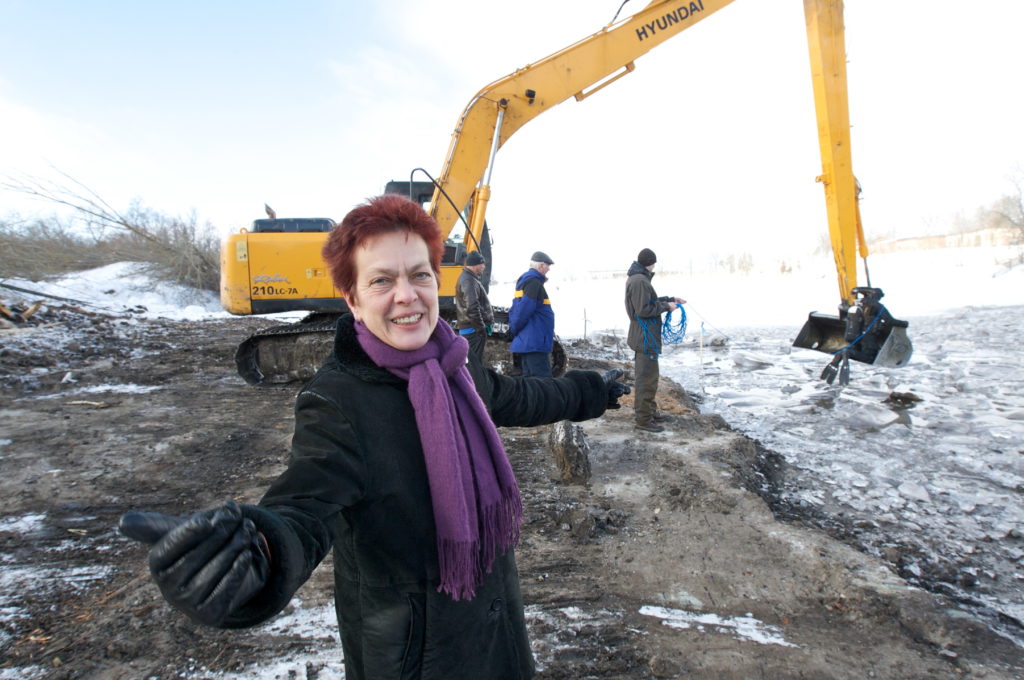 The Estonian National Museum’s own home was completed thanks to three very simple underpinnings: belief, trust and cooperation.

The National Museum’s more than 100-member organization decided in 2006, when a conceptual design called “Memory Field” won the architecture competition held for the museum building, that our mission is not just constructing a building but coming up with the philosophical framework for the 21st century Estonian National Museum. We thus faced a project that was bigger than the level of whether the building itself was to each individual’s liking or not. It was a project that was a historic, once in a lifetime opportunity. This attitude shaped the mindset of the National Museum staff and allowed us to keep smiling even when the popular sentiment occasionally turned sour, with people asking why school lunch money was being sued to build some pointless building. The museum people’s heart and soul as well as their knowledge and skills were on board for the establishment of the Estonian National Museum building, and the museum accepted a large piece of their contributions.

The belief that the National Museum needed a proper home developed long before our time. We just needed to adopt this creed and it was very easy to do. It wasn’t hard to believe in the need, when one day we needed to save folk costume from spouting water in the basement and another time, archive volumes had to be rescued from a ceiling that was sagging through. It was easy to instil the belief from the volumes of minutes and correspondence that documented a conscientious striving to build a National Museum building since 1909 or provided an emotional account of how, in the first half of the 20th century, every person who cared about Estonia canvassed the country at least once in their lives, looking for antiquesand recording folklore. So the belief developed as a mix of the past and present, skills, dreams, ideals and reality. It grew into a values-based yet also realistic belief.

The sense of the obligation on our shoulders to make a home for the National Museum a reality forced us to look, at least within ourselves, for an answer to the question of why the previous efforts did not succeed (the current one was after all the firth project!). The reason was never merely shortage of funding; there was always something else as well. And that “something” was usually the participants’ own weak cooperation, the tendency to get bogged down looking for culprits, foundering in details when the whole was the important thing. We tried to steer clear of those shoals. Our indispensable aids were cooperation and openness to advice and criticism, the strength of the museum team. The National Museum was a product of everyone’s efforts: the Ministry of Culture, the City of Tartu and Tartu Rural Municipality, all schools and institutions of higher education, other museums, cultural institutions and societies and private citizens. But it still wouldn’t have been enough for “Memory Field” – that superb idea presented in the form of a sketch plan – to be developed into an enduring and functional building in Estonia’s climate.

The National Museum gathered many circles of experts around itself, and trusted them. Peeter Mauer left his post at the Ministry of Culture to take the helm of the Estonian National Museum Construction Foundation. Indrek Tärno served as a punctual and meticulous project manager, an “interpreter” between the museum community and the engineers since 2007, and became so intertwined with the museum that I often was astonished to hear him eloquently explaining to the designers of technical utility systems why water pipes mustn’t pass through the museum vaults.

The National Museum was the creation of all the people and institutions who served as design developers, architects, builders, land improvement specialists, the people who came up with the ideas for permanent exhibitions and designed then, during those 10 years, and who became a part of the National Museum in this way. There were many disputes, differences of opinion and even tears spilled during these years. Indeed, the foreign architects behind “Memory Field, Lina, Dan ad Tsuyoshi, probably wept the most as Estonian engineers bent their imaginative and ambitious idea into a construction project. No matter how tense and dramatic the working meetings got over the years, there was never a time when we parted angry. We left as friends, and we’re still friends today. In my mind, even the frogs in Raadi Pond supported the construction of the Museum. They cheerfully moved from one body of water to the next, when their former abode had to be cleaned and dredged. I won’t bring up the deer and foxes who worked with us out in the fields of Raadi; they understood what was going on once the first loads of waste were hauled away from Raadi.

Of course, there were some who wearied and drifted away during the long journey. But mostly the reason behind their disappearance was that trust vanished from the cooperation. Then it was necessary to redress the balance and continue, with different players. We didn’t waste time nursing grudges or playing the victim. We did our work every day.

The head of the European Investment Bank committee of experts, Antonella Calvia-Goetz, came out with us to the potential location of the museum building out on the waste land in Raadi one gloomy and stormy November evening, and asked how we dared build a museum in a spot that might draw wolves or the Russian military. On that evening, I realized that Luxembourg wouldn’t be able to understand how a nation might keenly sense past injustice yet believe so strongly in the power of its culture that it would do battle with the “wolves” in the name of that conviction. I felt in every cell of my being that spirit is more powerful and influential than money. The European Investment Bank was afraid of wolves, but we wanted a museum; Antonella wanted to go and have dinner, but I wanted to get to work. The making of the Estonian National Museum was just that simple.

KRISTA ARU was the director of the Estonian National Museum 2006-2012, from the competition declaration until the beginning of construction works. Many people have convinced that regarding to her steadiness and trust made the new building possible.