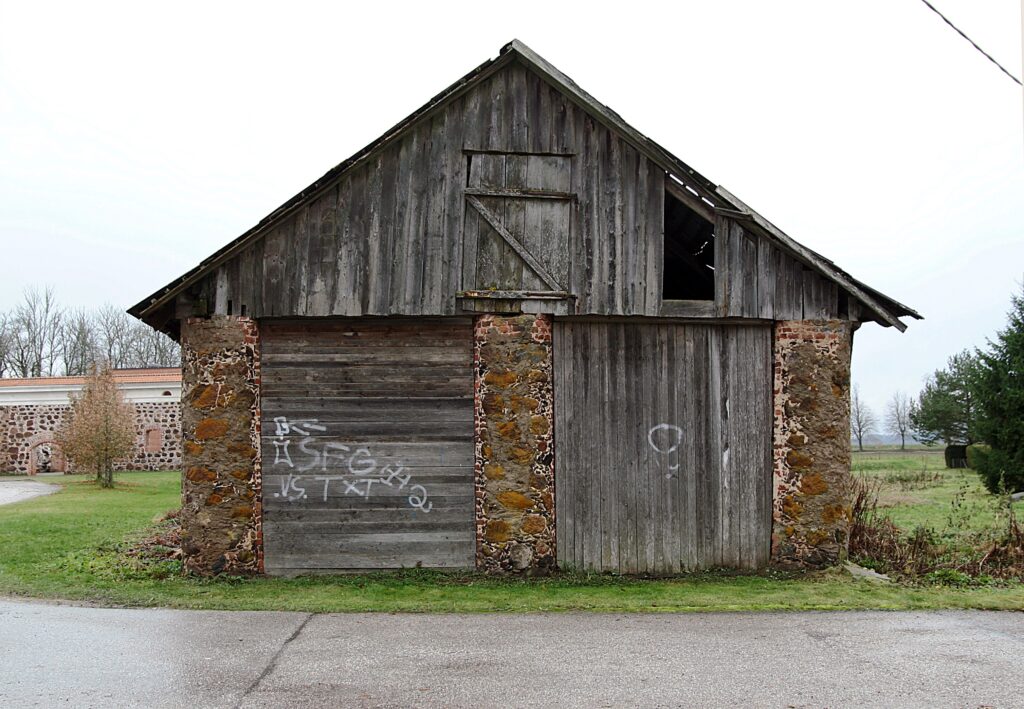 Laura Linsi, Roland Reemaa. A frame in the landscape

The stocky fieldstone columns of Viljandi County sometimes form a part of a romantic landscape of ruins, sometimes a utilitarian agricultural complex. Although built more than a hundred years ago, they form architecture with a strong presence in the here and now. They are a framework that can be either filled or let alone as needed.

A frame in the landscape. Or possibilities for a permanent structure.

We have noticed buildings of utilitarian nature in Viljandi County with their walls rhythmically accentuated with protruding round or rectangular fieldstone columns. It is clear that the columns are about a hundred years old if not more while the lightweight walls between them are somewhat more recent. In Heimtali, we found such massive columns standing independently – there is no lightweight wall between them or a roof above them. The fieldstone columns in Heimtali are an architectural frame. They form the ruins of the Heimtali manor barn which provides a good basis for the discussion on the role of ruins as a mere symbol. The focus of attention is now on their function as an organiser of space and the integrated part of a new possible building.

The present situation allows us to consider the columns as a constructional frame that can be used as a fulcrum. A fieldstone column in its structure and detail is a typical construction allowing extension and reduction. The network created with the columns can be used in its entirety as in case of the initial barn or only partially by supporting smaller sheds and utility spaces. The frame may be filled with a more permanent brickwork, delicate wood cladding or even a low fence. The frame may remain unfilled altogether. The content changes while the basic structure remains. The constructed frame as an amplifier1 allowing the structure to adapt to the user’s needs plays and important role in architecture. This could be found in the recently opened building of the Estonian Academy of Arts as the concrete frame facing the courtyard allows the extension of the interior, similarly in the Dutch structuralism with Herman Hertzberger working to include the user in the design process in the 1970s, as well as in the encouragement of eternal growth characteristic of Japanese Metabolism. We are also reminded of Jean-Nicolas-Louis Durand’s concept of a building as the result of connecting modular elements. Written in the 18th century, Durand’s texts form also a link with the contemporary industrial building that uses a standard detail to solve functional needs and thus also the problems of volume. Typicality is not an aesthetic goal but the result of a rational need for space. If the classical order was searching for the ideal proportion and volume composition especially in the façade, then Durand abandoned the three-dimensional space and presented buildings in a plan as fine line diagrams. Such an abstract approach to space considers the building as a whole to be of secondary importance and allows various buildings or the various parts of the same building to be considered as separate units in time and space. It also allows the typical detail based on the local culture, architecture and needs to come forth to be rebuilt and reused. The emphasis is on material and its characteristics and on forming the connection between the materials. In the columns in Heimtali, the red brick forming a narrow and precise slit becomes almost ornamental amidst the adjacent field stone mass. By combining the utilitarian aspects and the openness of the usage, such thinking is brought together in an unformalized simple architecture that can be seen in Estonia and all over the world – a shed.

It is difficult to believe that the architect of Heimtali manor considered such adaptation in time either theoretically or economically while designing the barn in 1858. We, on the other hand, can undertake it as an exercise in thinking in the context of urbanisation and the shrinking rural areas 150 years later. If we imagine how an ancillary building of a manor complex in Viljandi County was used, we see it covered with a wide hip roof. The hefty buttresses bore a span of 12 metres in width and the roof extending over almost 800 m2 provided storage space for various uses: fodder for winter, animal shelter, agricultural tools. A timber framing wall was built between the columns constructed of fieldstones that were collected while cultivating the fields, thus there was fresh air with the crop dry and wild animals outside. The length between the columns could be made more closed or open with various materials as needed. This is how we come across such fieldstone frames in the landscapes of the county. Across the road from Heimtali barn ruins, there is a large shed made of timber extending over fifty metres between similar fieldstone columns. The threshing barn of Päri manor2 in Viljandi County represents a somewhat more complex overlapping of functions with the area between the columns filled partly with brick, fieldstone and vertical boarding. At Kingu in Saksaküla village, the length between the columns was densely filled with calcium-silicate bricks and glass blocks during the Soviet era creating a proper car repair shop. The barns of Õisu, Väimela and Tori manors merely lie crumbling and waiting. Some of the above-mentioned examples are under heritage protection while others are not. In the context of the given essay, it does not really matter. Quite the contrary, we consider the durability of architecture beyond time and based on needs, notwithstanding the interference of precepts.

The knowledge of the past and self-identification by means of ruins have been recurrent topics both in architecture and in art ever since the Renaissance. Ruins represent the mentality and ambitions of the past and despite the implementation of the initial aims, we appreciate their apparent decay, their surrender to nature and disintegration into the ground that bore them. 3 Compared to the depleting rural areas, the hidden potential of the ruins as a romantic symbol in urban environments has reached the toolbox of real estate developers. The ruins may unexpectedly become the symbol of gentrification much like industrial buildings in case of lofts and chimney remains in public spaces that we can see either towering above new developments in Rotermanni Quarter in Tallinn or in the residential area rising at the site of Kodak factory in Harrow, London. In the midst of the roaring urban constructions the barely standing remains may still have the one last aestheticizing breath left to create the narrative making the entire development as well as the customer more distinctive.

The polemicized nature of the urban ruins may seem oppressive while the fieldstone columns don’t. Their practical presence dominates over the romanticised past. The intriguing diversity of possibilities is still there – a random shed using only one of the columns as its end wall, an animal enclosure with the column grid of the ruins establishing its borderlines, children and animals who use the columns only as a topographical feature to play or build a nest on. Although under heritage protection, the ruins do not carry a symbolic value only. The stocky fieldstone posts feature a building present in the here and now. Their spatial situation, including their potential for narrative creation is more than a mere attractive article for sale. It is liberating to see a construction in ambivalent use that does not require a complex adaptation to contemporary standards but waits for the natural use of its details. If there should ever be such need at all.

LAURA LINSI and ROLAND REEMAA began working together as students at the Estonian Academy of Arts. In 2016, they established their office RLOALUARNAD in order to continue their work with art and architectural research projects. In collaboration with Tadeas Riha, Roland and Laura curated the Estonian Pavilion “Weak Monument” at the 16th Venice Architecture Biennale and published the book “Weak Monument. Architecture Beyond Plinth” (Zurich: Park Books, 2018). In 2018, they are also visiting lecturers at the interior architecture department at the Estonian Academy of Arts.