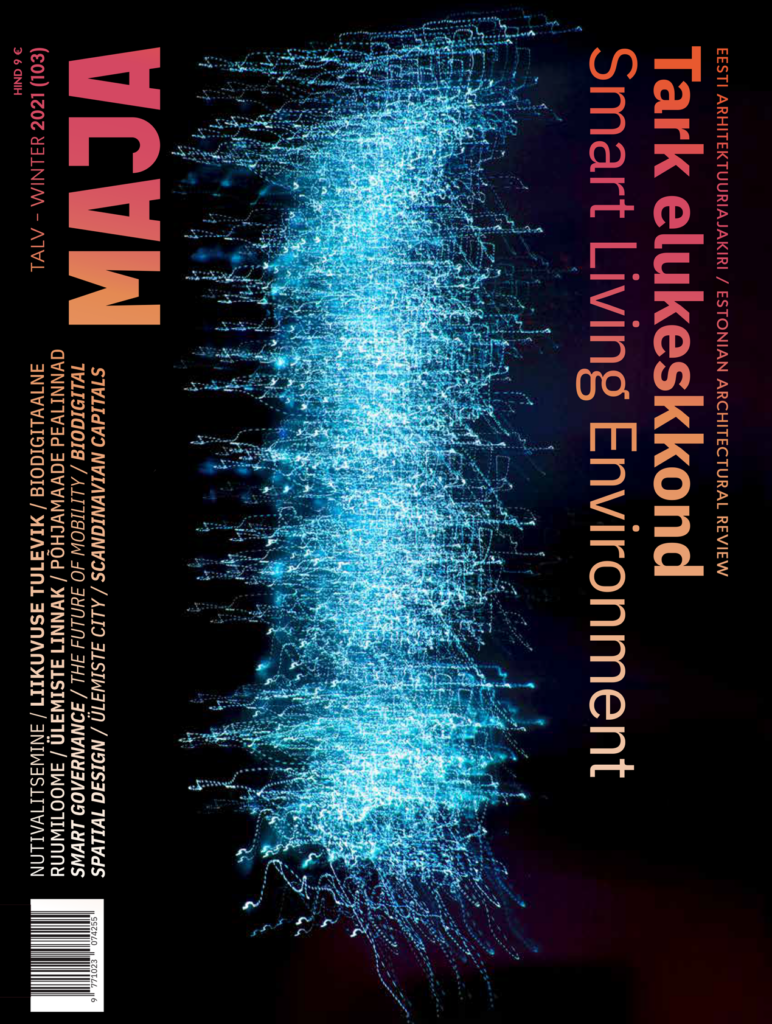 Technological development has transformed many sci-fi ideas into our daily reality. The first sighting of a Starship delivery robot cruising the streets of Tallinn alone did not evoke astonishment but rather an appreciative ‘Finally!’. While smart applications were expected to provide solutions to the challenges of the built environment, the concept of the smart city has come to be dimmed by an air of technological dystopia. It is seen as a kind of resurrection of the Modernist attitude with not much space for anything human and arbitrary. The smart city appears as a machine-like construct where the world is seen and featured through the eyes of robots and digital footprints, life is reined by grotesque over-rationalisation and experience is eerily mediated.

In reaction to the techno-dystopian vision of the smart city, there has recently emerged a concept of the human-centric smart city, highlighting various compelling challenges for the society and man—how can the virtual space be in the best service of the occupants of the physical space? How do we want the smart living environment to steer our habits? How can smart solutions facilitate services? But it is not only about comfort and efficiency. There have been frequent controversial claims that the seemingly climate-friendly innovation actually places an additional burden on the environment. Every service that is made more convenient and affordable will also be used more—it is not that ‘growth’ as such is problematic but service design calls for a value-based vision. A good example of a value-based urban policy is the Finnish platform Whim allowing the subscription to packages of both private and public mobility services that will always remain more affordable than the upkeep of a private car. The emergence of the automobile in the early 20th century has crucially shaped our current urban space but which modes of mobility will shape our habits and environment in this century? We will ask Estonian mobility entrepreneurs about their innovative ideas in development and also future projections in their field.

Many of the challenges in Estonia are related to population decline and low population density. We will, thus, also talk about the smart living environment at large and ask how smart options could benefit our sparsely populated areas. We will define and explore smart environment in terms of the use of technology and evidence-based solutions in spatial design for the welfare of both people and the environment. We will inquire into the smart topics laid on the table in our local governments, universities and companies and attempt to piece together the prospective big picture.

As an example of a smart living environment, we will consider Ülemiste City that has assumed an ambitious role as a trendsetter in the application of smart solutions. Will Ülemiste soon be the first self-driven district in Tallinn with spatial decisions made by sensors and complex models? We will explore the possible impact of such a smart living environment on human welfare and psyche. The smart city rankings are not actually led by tech-savvy areas around the globe but the Nordic capital cities. We will explore their ambition to kill two birds with one stone in combining human-centric urban design, climate strategies as well as smart governance models.

Smart cities are not merely for people and robots. Due to climate change and biodiversity decline, the combination of the physical and the digital is increasingly related to the needs of all species. Combining the natural and built worlds can be assisted by biotechnology, for instance, the use of bioreactors as a source of energy and by the smart application of landscape data in urban design, for instance, by means of biodigital twins or augmented reality. It shifts our perspective and poses the most critical and intriguing challenge of a smart living environment—how to adopt a life-centred rather than human-centred approach.